Improved engine load in this measure relates to the engine load of the auxiliary power producing engines which provide electrical power to the ship.

The auxiliary engines are used for electrical power production on board and can represent up to 15% of the total fuel consumption for a vessel with diesel mechanical. There are many different engine configurations, with normally 2 or 3 auxiliary engines on a diesel-mechanical vessel, and 4 to 6 auxiliary engines on diesel-electric vessels. The engine performance and efficiency aspects of the auxiliaries are quite similar to the large 2-stroke propulsion engines as they are often more efficient at higher loads.

Applicable for all vessels at all ages.

The key of this measure relates to the fact that many vessels run more auxiliary engines simultaneously than are actually needed regarding power consumption vs. production-basis during normal deep sea transit. This is amongst others related to risk aversion of black-out, i.e. your only running auxiliary engine dropping out. The safety margin against black-out from running more than one engine can, however, often be reasoned. During manoeuvring or other similar operations losing power production can be very critical, but during deep sea transit in calm weather it is typically not critical to experience a black-out. In addition to risk aversion for black-out, general wear and tear of the auxiliary does tend to bring down their rating (maximum kW production), meaning that the assumed load level is in fact higher. This is quite normal and should easily be fixed via e.g. overhaul of the turbochargers.

In order to minimize the fuel consumption on the auxiliaries through increasing the average engine load, the number of auxiliary engines running must be minimized at all times. This could be included in a ship specific auxiliary engine operation guideline. A guide for the number of engines running could be developed based on the possibility to measure the kWh produced and compared with the operational mode. Lowering the number of auxiliary engines also reduces the engine hours, the rate of wear and tear per hour, lubrication oil consumption and consequently work needed to do maintenance. The average engine load is as such on its own a good performance indicator to work from, but it must not contribute to compromising safety, and a risk based approach is as such advised.

The reduction potential is estimated at 0% to 20% on fuel consumption on auxiliary engine.

The basis for saving fuel on increasing the load of the auxiliary engines through minimizing the numbers in operation simultaneously can be seen by the example in Figure 1. In the example it is evident that it should be possible to reduce the specific consumption by 5 to 15 g/kWh for over 50% of the auxiliaries’ operational time, i.e. 2.5% to 7% reduction. 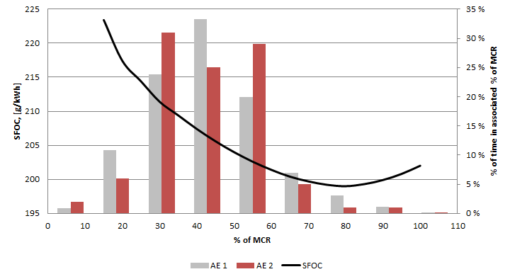