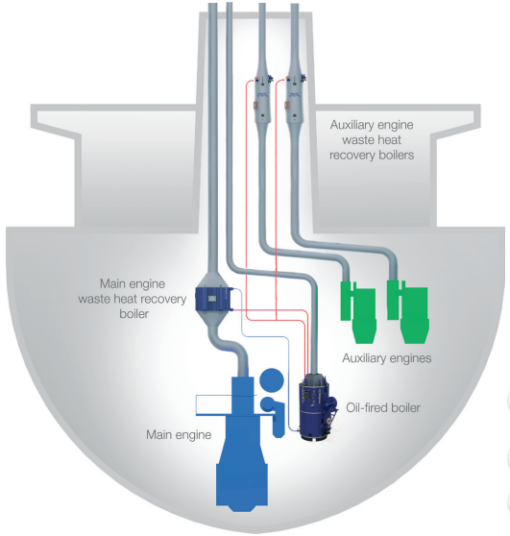 Figure 1: Schematics of traditional main- and auxiliary engine set up, with exhaust gas boiler on both, source: MEPC 68/INF.16

Exhaust gas boilers recover the heat from the exhaust gas of auxiliary diesel engines to generate steam and/or hot water, or useful heat for process heating. Depending on system design, these boilers can enhance the efficiency of the auxiliary engine system by up to 20%, leading to lower overall process costs. See Figure 1.

Applicable for ship types of all ages not fitted with shaft generator where an auxiliary engine will be in service in all operational modes (seagoing and in port). Excessive heat from the engine exhaust could then be recovered and utilized.

In case of ship fitted with shaft generator, the auxiliary engines will normally be in service in port. Excessive heat is then assumed only to be available when in port.

For reference an assumption is made that the auxiliary engines of large deep sea cargo ships in transit usually are run with one 1MW engine at 60% to 80% load, the average power output is around 600 to 650 kW. This can yield an estimated steam production between 450 kg/h and 500 kg/h at 7 barG.

The benefit from the measure might relate to reduced fuel consumption on the auxiliary engine itself due to lower need for auxiliary power for e.g. process heating, where both steam and electricity can be used for heating purposes. Alternatively, and likely more frequent, the benefit may come as reduced fuel oil consumption on an oil fired boiler in cases of insufficient steam production from main engine exhaust gas economizer. To simplify the benefit, the savings are estimated as total percentage saving of the auxiliary engine’s fuel oil consumption.

The estimated reduction potential is 0% to 5% of the auxiliary engine’s fuel consumption.